After starting on a new programming project I needed some way to have the application persist data between sessions. I eventually found SQLite, and the enthusiasm grew as I found out that there is an EntityFramework provider for this. Microsoft has even went a step further and made an EntityFrameworkCore implementation, which even supports migrations (albeit limited). When I saw that EntityFrameworkCore was supported even in regular .NET applications I reached peak enthusiasm and decided that this was my path.

I eagerly started reading Microsoft’s “Getting started” documents, and almost immediately ran into problems. The migrations described in the previous link all mention running “dotnet ef” commands. The problem is that the documentation doesn’t specify where to execute those commands. And when I finally found out that they should be executed in a PowerShell, they didn’t even work and threw the following error:

There are a lot of results on Google and StackOverflow about this, and they all touch on the same subject, but no one post gave the complete picture, and many of them even contradicted each other… not to mention that most of them were obsolete and targeted the pre-release versions of EntityFrameworkCore.

It turns out you don’t even need to use the “dotnet ef” command when creating regular .NET Framework libraries and applications, as it is only meant for .NET Core.

So, after hours of trial and error I finally managed to get it working like you would normally use EntityFramework. That’s when I decided to write down my recipe for success so that I can look at that the next time I need to use SQLite and EntityFrameworkCore. Hopefully this will turn up in search results to help other people as well.

Create database and set up migrations

Your project is now complete and it’s time to create the database and set up the migrations.

For extra verification you can open the database and have a look. I use a tool called SQLite & SQL Server Compact Toolbox. Just create a new connection, browse to the file that was created and open it, and you should see something similar to this: 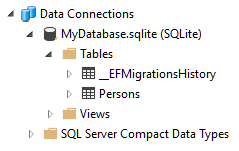