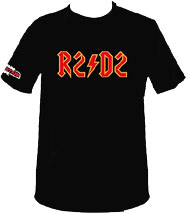 During the next weeks I’ll be reminiscing some of my experiences during my big USA vacation. I’ll start off by talking about t-shirts. This might not sound very exciting, but some of the T-shirts I wore created some funny situations.

In Las Vegas, when I took the elevator up to the restaurant in Stratosphere Tower a maintenance guy took the elevator with me (in addition to the female elevator operator). I was wearing my "Save the cheerleader…" t-shirt (advertising the TV-show "Heroes"), but the maintenance guy didn’t see the Heroes logo and was wondering if I was a cheerleader. I said "No" and pointed to the Heroes logo and explained that it was a TV show. The elevator operator then continued asking him if it would be so weird and wrong if I really was a cheerleader, and he grudgingly had to acknowledge that it wouldn’t mean a thing. He finished his elevator ride by giving my a knuckle-to-knuckle greet and saying that I was okay.

In the queue to get into Seaworld in San Diego I could hear people talking about how much they missed a particular show, and they kept looking at me. It was at that moment I remembered I’d put on my "Friends" t-shirt that day.

When I was in Venice Beach I thought it fitting to wear my t-shirt that says "Harmony", and it worked really well. Some people selling Henna tattoos stopped me and tried to push a tattoo on me saying that I couldn’t walk around with a Harmony-shirt without having a Henna tattoo. After letting them know that it’s perfectly possible to wear a Harmony-shirt without having to have a Henna tattoo, and also that I was quite happy with the tattoo I already have they let me go, but thanked me for chatting with them. Apparently not many people do that.

I’ve saved the best for last: My R2-D2 t-shirt I bought at the Star Wars convention in London last year. As you can see by the picture it doesn’t look like R2-D2 at all at first glance. Our tour guide at the Winchester Mystery House experienced the same illusion, so she asked me, in full public, what my t-shirt actually said. She said it looked like it said AC-DC, but something was off. I told her to read it again, but some other folks turned around and saw what it really said and told her.
Later that evening when walking through downtown San Jose some girls walked past us. As they had passed us we could her them giggling and saying "R2-D2, teehihi".

So if you’re ever in California or it’s surroundings, be sure to wear the correct t-shirts.