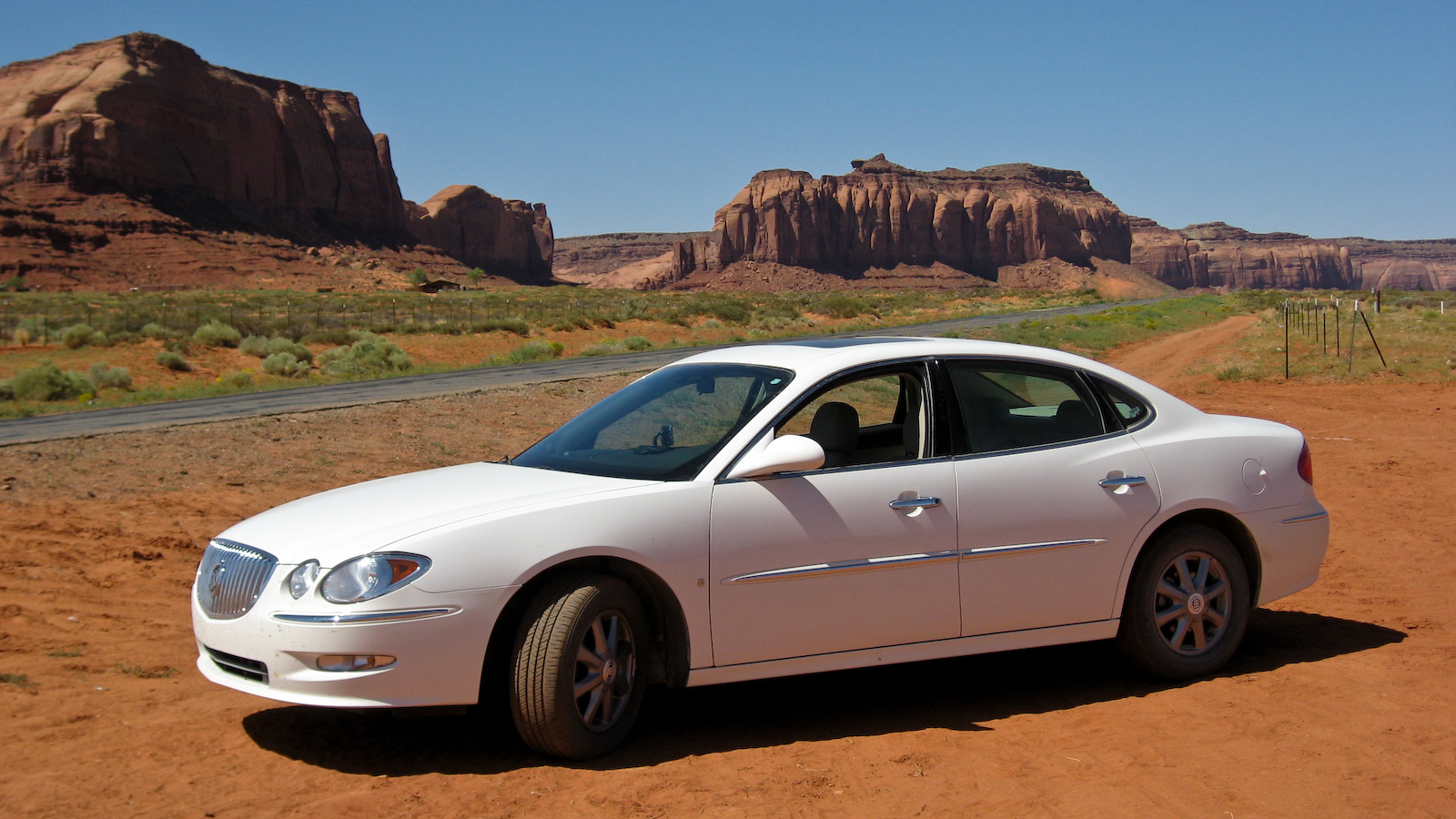 During my recent trip to USA I rented a car for the first time in my life. I was going to drive many, many kilometers and I certainly wasn’t planning on walking the distance, and public transportation wouldn’t take me to all the places I wanted to go, so I chose the freedom of having a car instead of being environmentally aware.
I arrived at the Avis car rental facility at LAX about an hour after having landed, excited about what kind of car I would get. I originally reserved a "Chevrolet Impala or similar". I’d heard stories of people getting the "or similar" and getting a cheap Asian car (still nice cars, but I wanted an American car for my big American road trip). I was pleasantly surprised to see that they gave me a Buick LaCrosse CXL. What follows are my experiences with this car during my trip.

This was, of course, a fully automatic car, as all American cars are. Power steering, power windows… and an automatic transmission. The first days this caused me some grief, since I’m used to driving a manual transmission on my own car back home in Norway.

My first issue with the car was that I couldn’t get the transmission out of Park and in to Drive. I pushed the knob on the stick to try to move it, but it was totally stuck. And so was I on the Avis parking lot. It took me quite a while to figure out (there were no instruction manual in the car, of course) that I had to push down on the brake pedal to get the transmission stick to unlock. After looking embarrassed around I could finally drive out of the lot.

When you’re driving out of the Avis lot you have to stop at the gate to show the guards your papers to prove that you’re actually allowed to take the car out for a spin. This went very well, and I drove out the gate and to an intersection only 5 meters from the guards… and came to a very abrupt stop as I pushed the brake instead of the non-existing clutch. Automatic transmission vs. Glenn Thomas, 1 – 0. I could feel the looks of the guards watching me and laughing. I didn’t feel the need to turn around to get it confirmed.
This kind of abrupt stopping happened frequently the next few days until I could finally repress my clutch reflexes.
This repression caused some funny situations when I got back home to my own car. I could drive slowly up to an intersection and wonder why the engine made such weird noises when I suddenly remembered I had to push in the clutch when I’m stopping. Or I was driving down a road and the engine kept revving at a high rate and not shifting by itself, until I remembered I had to shift on my own now.

As I was getting the feel of the car I noticed that this was an extremely nice car. Silent running. Great acceleration. Good sound from the stereo. Lots of room. And 547 thousand radio channels. Whenever I was within radio distance of a big city I could never find a stable enough in-between radio channel to tune into my GPS and listen to the music stored on it. Fortunately I found a radio channel that was similar to my favorite Norwegian radio channel. Thank you 104.3 My FM.

My final issue about driving in the US is the gas stations. Not one station has the same procedure for tanking. I’m used to Norwegian bureaucracy which dictates how just about anything should be standardized. In the USA it feels like the complete opposite. One place you have to pay before you start tanking. The other place you can tank and then pay. A third place you have to pull a handle down to engage the pump. A fourth place you have to hold up a big sign saying "I’m ready" so that the guy inside can go and manually siphon up some fuel for you. To say that this lack of a system is confusing would be an insult to all other systems around since there is no system. This meant that each refueling sessions was a challenge.

All in all I enjoyed driving in the US, even if I had to learn how not to stop short. It’s definetely an experience I’ll repeat again some day… hopefully a bit more prepared.